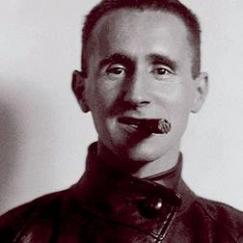 One of the progenitors of arts and instruction, Bertolt Brecht (1898–1956) was a theater and media practitioner and theorist who envisioned new forms of art for the twentieth century. He did this first by re-imagining the role of the spectator. As a playwright and director, he intentionally created politically motivated theater, in which his audiences were responsible for critically engaging with the ideas presented in his work. He altered the centuries-old positioning of the audience member, from passive spectator to active participant.

Specifically, Brecht invited his audiences to be informed participants who intentionally considered social bias, cultural prejudice, and other pervasive forms of manipulation. He believed that it was not enough to solely reflect on new ideas within the theater space; he invited his audience and performers to act on the ideas they had generated in practical settings outside of the theater.

Brecht’s theories demanded a re-functioning of the traditional theatrical space, from a place of entertainment into an educational space, in order to meet the needs of the ideal spectator that he imagined. This new space, the “Epic Theatre,” as he described it, “appeal[ed] less to the feelings than the spectator’s reason” and required that “instead of sharing an experience the spectator must come to grips with things [in the world]” (Brecht 1968a, 23).

The restructuring of the theater space also required new theater techniques. To do this, Brecht rejected the melodramatic spectacle of the popular theater and instead produced a theatrical space composed of fragmented scenes, pictures, text, and music—each contrasting, contradicting, and interrupting the traditional theatrical trajectory in order to remind spectators that they were no longer participating in artifice. Brecht held that the theater should “arouse [the viewers’] capacity to action” (1968b, 37).

Brecht’s reimagining of theater audiences, spaces, and techniques demanded new and timely literacies. While he never directly addressed the concepts of media literacy as we understand them, Brecht’s practical work and writings were precursors to critical literacy and subsequent media literacy projects that developed later in the twentieth century.