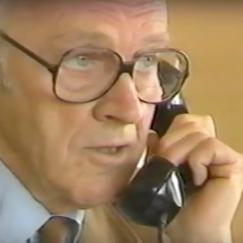 Dallas W. Smythe was a professor, activist and economist who explored the field of communications and mass media. He served as the economist for the FCC during and after World War II, at a time when the agency was trying to ensure broad public access to television and telephone service. Before moving to Canada in 1963, when his political activism was under scrutiny by J. Edgar Hoover’s FBI during the Cuban missile crisis, he taught communication research at the University of Illinois Institute of Communication Research (ICR), which had been established by Wilbur Schramm in 1948. These, he worked along Herbert Schiller, whose work explored the rise of cultural imperialism as the United States exported its mass media entertainment abroad.

Smythe introduced the idea that, in modern media systems, “the audience is the product.” He developed the idea that audiences are a type of commodity that is produced, sold, distributed and consumed. Applying Marxist analysis to daily life, he observed that even when workers are not working, their leisure activity is commodified through advertising. By using media and viewing advertising, workers end up participating in capitalism even when they’re relaxing at home (Smythe, 1977).

In one essay, Smythe comments on A. J. Liebling’s famous aphorism that media’s nonadvertising content is the “free lunch” that’s never really free. He writes:

As with the hors d’oeuvres or potato chips and peanuts given to the customers of the pub, bar, or cocktail lounge, the function of the free lunch is to whet the appetite. In this case, to whet the prospective audience members’ appetites and thus (1) attract and keep them attending to the program, newspaper, or magazine; (2) cultivate a mood conducive to favorable reaction to the advertisers’ explicit and implicit messages. In the policy of the mass media, the characteristics of the free lunch must always be subordinated to those of the formal advertisements, because the purpose of the mass media is to produce audiences to sell to the advertisers (Smythe, 1981, p. 242).

Smythe demonstrates how, even though people may experience newspapers, magazines, television and radio as “free,” we ultimately pay for media indirectly. As an economist studying mass media, Smythe helped contribute to the emergence of critical cultural studies research in North America by unpacking the political and economic consequences of a media system built upon “selling eyeballs to advertisers.” In this indirect system of payment, advertisers control the content that we consume, ultimately limiting our freedom of choice. He points out that this system supports capitalism by enrolling the communications industry in maintaining the political and economic status quo.

As Smythe predicted, advertising-supported media systems have been very robust over a long period of time, fueling the development and rise of the Internet and social media platforms like Facebook and Google. Today, marketing companies continue to find new ways to saturate every public and private space with advertising and use data supplied by consumers to deliver micro-targeted messages that can be hard to resist.