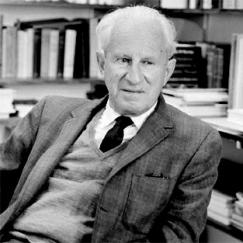 A philosopher, social theorist, and political activist, Marcuse gained world renown during the 1960s as the “father of the New Left.” Author of many books and articles and a university professor, Marcuse gained notoriety when he was perceived as both an influence on and defender of the New Left in the United States and Europe. His theory of one-dimensional society provided critical perspectives on contemporary capitalist and state communist societies, and his notion of  “the great refusal” won him renown as a theorist of revolutionary change and “liberation from the affluent society” (Kellner 1984, 322). Consequently, he became one of the most influential intellectuals in the United States during the 1960s and into the 1970s.

Many people have heard about the Frankfurt School, which was an influential research group in the 1930s in Germany. In 1933, Marcuse joined the Institut für Sozialforschung (Institute for Social Research) in Frankfurt and soon became deeply involved in its interdisciplinary projects, which included working out a model for radical social theory, developing a theory of the new stage of state and monopoly capitalism, providing a systematic analysis and critique of German fascism, and developing a theory of the new roles of mass culture and communication in modern societies.

Marcuse deeply identified with the critical theory of the Institute and throughout his life was close to Max Horkheimer, Theodor Adorno, and others in the Institute’s inner circle. This group explored the functions of culture, ideology, and mass media in contemporary societies -- and the ideas that developed here constitute one of its most valuable legacies.

The critical theorists excelled as critics of both so-called “high culture” and “mass culture” while producing many important texts in these areas. Their work is distinguished by the close connection between social theory and cultural and media critique and by their ability to contextualize culture within social environments and struggles. In particular, their theory of culture was bound up with analysis of the dialectic of enlightenment (Horkheimer and Adorno 1972).

Culture—once a refuge of beauty and truth—was falling prey, they believed, to tendencies toward rationalization, standardization, and conformity, which they saw as a consequence of the triumph of the instrumental rationality that was coming to pervade and structure ever more aspects of life. Thus, while culture once cultivated individuality, it was now promoting conformity and was a crucial part of “the totally administered society” that was producing “the end of the individual” (Horkheimer and Adorno 1972, 17, 38).

​Marcuse and the critical theorists thus came to see what they called the Culture Industry as a central part of a new configuration of capitalist modernity, which used culture, advertising, mass communication, and new forms of social control to induce consent to and reproduce the new forms of capitalist society. The production and transmission of media spectacles that transmit ideology and consumerism through allegedly popular entertainment and information were, they believed, central mechanisms through which contemporary society came to dominate the individual.