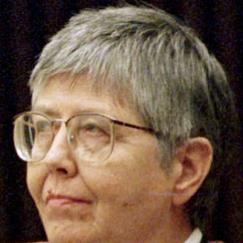 Mary Daly (1928-2010) was a groundbreaking, radical feminist theologian and philosopher, one of the first in the modern era to question the relationship between oppression of women and male depictions of God. After earning a PhD in religious studies in 1953 from Notre Dame’s St. Mary’s College, she left the U.S. for Switzerland because at the time, no American universities would accept a woman into a graduate theology program. In 1966, after earning doctorates in theology and philosophy, Daly joined the faculty of Boston College, where she would teach until being forced to retire in 2001.
Daly’s tenure at BC was tumultuous, mostly because the Jesuit institution often objected to Daly’s critique of patriarchy that linked Christian theology to real world negative consequences for women. Her first two books, The Church and the Second Sex (1968) and Beyond God the Father (1974) called out misogyny in the Catholic Church. Her next, Gyn/Ecology: The Metaethics of Radical Feminism (1978) linked patriarchal religious doctrines to sexual and physical violence against women. It also invited women to free themselves from links to men entirely.
Daly’s revolutionary ideas were presented with humor, wit, and especially word play. She understood that language shapes one’s sense of self and believed that words could be a powerful tool in the fight against injustice. When colleagues rejected her feminist challenges, she said they suffered from "academentia" and she agreed (with double-entendre glee) that her work was “positively revolting.” She was especially famous for creating new meaning with well placed hyphens or slashes, as when she called people who treated women resistors as maladjusted rather than oppressed, not “therapists,” but “the/rapists” and questioned whether their urging women to “re-cover” was no more than asking them to sweep their justifiable outrage back under the proverbial rug. At every turn, Daly used words to stop readers in their tracks and make them re-think cultural constructions masquerading as unassailable fact.