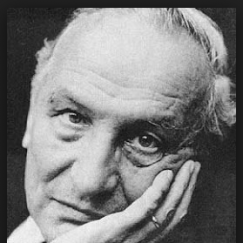 "...artistic activity is a form of reasoning..."

Anything written in this little box would pale in comparison to the encyclopedia that is http://www.bobolinkbooks.com/Arnheim/Home.html but nonetheless... Arnheim was born just after the turn of the last century, to a Jewish family in Germany. He discovered Freud during his teen years, which inspired him to study psychology. His PhD at Berlin University concerned what might be classified under "audience studies" today. He reviewed films for a newspaper until his first book Film as Art was banned by the Nazis. Thereafter he fled fascism by way of Italy, the UK and finally the US. His American research in visual perception was underwritten by major fellowships, and he went on to develop theories of cognition and visual-spatial ability. Upon retirement from Harvard, he became a visiting professor in Michigan. He was involved with the American Psychological Association and the American Academy of Arts and Sciences until his death at 102 in 2007. Photo: shallwemeanderon.blogspot.com

The Intelligence of Vision: An Interview with Rudolf Arnheim
http://www.cabinetmagazine.org/issues/2/rudolfarnheim.php